Jerusalem A City of Magic and Radiance!

With over 3,000 years of history, Jerusalem is Israel’s capital and by far one of the most fascinating cities in the world. Reckoned as the largest city of Israel, it is a spiritual center of the Jewish, Christians, and Muslims.

Frequently visited by the pilgrims from every corner of the world, the ancient city is renowned for its ancient buildings, archeological wonders, magical walkways and spectacular views which are guaranteed to leave spectacular memories. Alongside, the city’s strikingly modern attractions deliver round the clock excitement for the lovers of arts, music, culture, and culinary nights. Needless to say, Jerusalem is a must-visit place in Israel.

No other city offers as many tourist attractions in a single square kilometer as Jerusalem. Beyond the shadow of a doubt, it is one of the most intriguing places on earth. A tour of the Old City of Jerusalem is a great opportunity to explore and connect with the city’s awe-inspiring history, culture, and spirituality. The city has a rich archeological history along with contemporary arts and vibrant markets, where one can indulge in delectable delights.

Following places in the Old City of Jerusalem are beyond words and must not be missed: 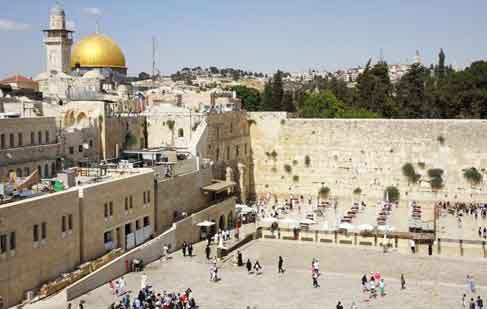 The old city is home to the Western Wall (aka Wailing Wall or in Hebrew – Kotel). The ancient Western Wall is thousands of years old and is also the last remaining wall of the Second Jewish Temple. It is regarded as the holiest site in the world for Jews, where countless visitors come every year to recite prayers. These prayers are either spoken or written and then placed in the cracks on the wall.

Situated underneath the Western Wall, the tunnels showcase a glimpse of the various epochs in the history of Jerusalem. This place will surely give you a surreal experience of the past. 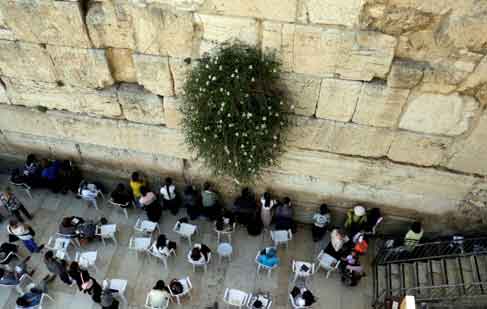 City of David – Go Back To Ancient Times!

This captivating archeological site offers a chance to discover the story of Jerusalem during the reigns of King David, King Hezekiah, and King Solomon, where many treasures have exhumed. While on tour, you can take a flashlight and dabble through the flowing water of the Siloam Tunnel which was designed during the reign of King Hezekiah.

Just above the Western Wall, there lies the “Dome of Rock”, an iconic site for the Muslims as this place is where Prophet Muhammad is said to have risen to heaven. 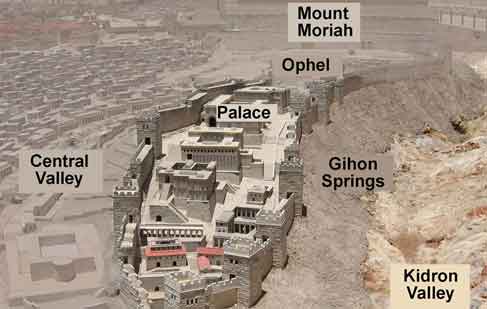 Via Dolorosa – The Way Of The Cross!

The Via Dolorosa (“Way of Suffering”, “Way of Sorrow” or simply “Painful Way”) is a street in the old city of Jerusalem, believed to be the path on which Jesus walked on the way to his crucifixion.

The winding route from the Antonia Fort west to the Church of the Holy Sepulchre—a distance of about 600 m (2,000 feet)—is a celebrated place of Christian pilgrimage. The current route, established during the 18th century, replaced various earlier versions. It is marked by nine Stations of the Cross; there have been fourteen stations since the late 15th century, with the remaining five stations located inside the Church of the Holy Sepulchre.

Also known as the “Church of the Resurrection” or “Church of the Anastasis” by Orthodox Christians, it’s a church in the Christian Quarter, where a second century Roman Temple was erected over the place where Jesus was crucified and buried. When the Roman buildings were demolished, a series of rock-out tombs were discovered, one of which was of Joseph of Arimathea. Few Christians denominations consider the Garden Tomb (outside the current Old City Walls) to be a possible site of the crucifixion.

Downtown Jerusalem is a center of attraction of the modern metropolis which attracts countless tourists from all over the world. Bustling with amazing nightlife, culinary and a cultural exquisiteness makes it a major tourist attraction. The place is enriched with a plethora of fascinating neighborhoods such as Nachlat Shiva, the lively Yafo Street, and Ben Yehuda Street. Each of these places have their own uniqueness which makes them one of a kind.

Another interesting cobblestoned neighborhood in the heart of the city which offers a remarkable selection of shops, restaurants, outdoor cafes, and bars. This place is home to Kikar Hamusica (Music Square) – a cheerful and trendy outdoor space that offers live music daily.

This charming neighborhood facing the walls of the Old City of Jerusalem was originally built to escape overcrowding in the 19th century. Home to writers, artists, and academics, Yemin Moshe is famous for its green parks, windmill and oriental style houses, the YMCA, Herod’s Family Tomb, lively music center, and spectacular sights.

Ein Kerem – A Paradise On The Slopes!

Situated amidst the mountains and the terraced hills southwest of Jerusalem, Ein Kerem is among the most splendid neighborhoods. With winding paved lanes and church bells chiming, the city is a sight to behold. Ein Kerem radiates charm and its beauty give an impression of an island in a sea of green forest.

One must set aside some time on this escapade for visiting Israel’s largest cultural institution i.e. Israel Museum. The museum boasts Fine Arts, Archeologic relics, Jewish Art and Life Wings and also features the most exclusive collections of biblical and Holy Land archeology in the world. Some of the museum’s highlights include majestic art garden, the Dead Sea Scrolls, the Shrine of the Book, and the dedicated pavilion showcasing the museum’s prize exhibit. It is certainly a place worth visiting.

The Tower of David (also known as David’s Citadel) is one of the most significant heritage sites that features a host of archaeological ruins, dating back to nearly 3,000 years.

Situated nearby Jaffa Gate, at the entrance to the Old City, this ancient fort was originally built in the 2nd century B.C. to strategically reinforce the city’s defense. It was destroyed and rebuilt repeatedly over the centuries and it offers stunning panoramic views of Jerusalem from the top of ancient towers and turrets. Visit the Tower of David Museum and watch how Jerusalem’s history is brought to life with a wide array of exhibitions, art installations, tours, cultural events, and activities for all ages.

Opened in 2015 at the heart of the Jerusalem with an assistance of thousands of supporters of Israel, the FOZ museum offers an hour long tour which tells the story of the people who helped the Jewish nation over the last 200 years. This captivating museum includes some of the most technologically advanced exhibits in the world.

What could be more interesting than seeing the city in a Segway Tour? This adrenaline-packed tour will allow you to explore the beauty of Jerusalem from an entirely unique perspective. The Segway tours leave from several central spots including the Armon HaNatziv Promenade (East Talpiot), Yemin Moshe, and the Old City as well as the museum area and the Knesset.

If you are a fan of joy rides then you should definitely not miss the Time Elevator. It is an interactive experience that takes visitors on voyages to fascinating places, with motion-based seating in a unique hall, filled with special effects.

The Time Elevator actually puts you in the driver seat as you’re taken on a journey through the history of Jerusalem. So, enjoy this amazing ride while experiencing the evolution of Jerusalem from ancient times to the present day.

A 62-acre zoo with a beautiful lake at its center, the Biblical Zoo encompasses two levels, interconnecting pools, and waterfalls. Surrounded by the hills and lush green lawns, this zoo includes several research laboratories dedicated to wildlife conservation. To entice audience of all ages, there are over 200 species on view, including the ones mentioned in the Bible. In addition, there are regular animals too.

Close to the Zoo, is a magnificent, exquisite, and huge Aquarium that opens for visitors during the day and night, displaying marine habitat from the Mediterranean Sea, the Red Sea, and more.

The Teddy Park was founded by the Jerusalem Foundation in July 2015 in the memory of legendary Jerusalem Mayor and founder of the Jerusalem Foundation, Teddy Kollek. He served as the mayor of Jerusalem during 1965-1995. Mayor Kollek was an extraordinary person who contributed to several advancements in the city. This park serves as a meeting place between the new and old city of Jerusalem. In addition to this, it includes a wishing pond, original sculpture, an impressive sun clock, restorations of historical properties, and amazing water-fountains, featuring a light and sound evening show. Additionally, this park is home to a multimedia visitor’s center that constitutes exhibits about Mayor Kollek’s life and the development of the city.

Situated at the heart of Jerusalem, between the old city and the city center, between the historic neighborhoods of the German colony and Yemin Moshe, it is the site of the first train station that was built in the year 1892. After renovation, the First Station was turned out into a lively entertainment spot that is open for visitors throughout the week.

Being the capital city, Jerusalem boasts of several lively and trendy restaurants, bars, and entertainment spots that make this city one of the most happening places. The city offers plethora of options for night time entertainment where one can enjoy a delightful evening, a great meal, a cold beer or dance to great music. The nightlife of Jerusalem will definitely add more memories to your voyage.

When in Jerusalem, shopping must be on your to-do list. The capital city of Israel has a variety of stores, local markets, bazaars, high-end boutiques and fascinating malls. One can find Armenian ceramics or Judaica items across the stores in the old city of Jerusalem. Additionally, several stores sell attractive souvenirs at the city center.

Here are some of the best places to go for shopping in Jerusalem:

Just a short distance away from the Old City, one can explore Jerusalem’s most lively entertainment and shopping areas. Mamilla Mall is just a few kilometers from main Jaffa Gate and is considered as one of the most luxurious shopping centers in the capital city, replete with high-end shops, spa facilities, authentic middle-eastern flavored restaurants and bars with stunning views.

This market has an unrivaled atmosphere which makes it a must-visit attraction. Often referred to as “the shuk”, this Machane Yehuda Market offers a huge variety of food and clothing stores. Once the stores and vending shops close, the young trendy crowds, locals, and foreigners descend to the market streets to enjoy the nightlife and party in the bars and restaurants.

The Old City Market – Paradise amidst the Ancient City of Jerusalem!

This market is a well renowned tourist attraction comprising of a series of alleyways with a wide range of stalls offering a vast variety of products. This bustling market is an ideal place to pick up a unique souvenir (haggling is a recommended) and trying local delicacies.

Being a multicultural city, Jerusalem is a great place to explore diverse cuisines. One may choose to indulge in cuisines such as traditional Middle Eastern, North African, South American, continental European, and Asian fusion. From delicious street food to fine dining, the city has got it all.

Jerusalem’s wide range of culinary options can easily be found anywhere in the city – local delicacies in the street stalls, authentic restaurants in the lively markets and also you can reserve a spot at one of the Jerusalem’s several exclusive chef restaurants for an amazing gourmet experience.

Where to Stay in Jerusalem

You’ll find all kinds of accommodations in the Old City of Jerusalem. In addition, there are other options too in West Jerusalem around Ben-Yehuda Mall and Zion Square. The area is occupied with a host of restaurants, bars, cafes, and shopping markets. Available at affordable prices, one may opt for any of the hotels for your comfortable stay in Jerusalem.